Issue 10 of 100% Biodegradable is out now on Drivethru and Comicsy (with ComiXology release to follow at a later date), priced $0.99/69p 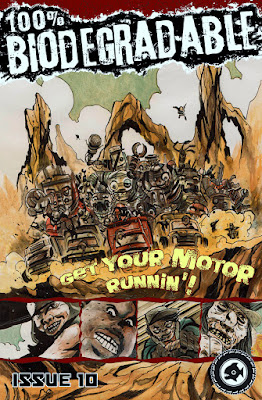 Inside this issue: Truckers tear their way across Hell’s Highway on an ill conceived mission of mercy, a lone soldier battles invaders and isolation, two apocalypse survivors face off against the psychotic android scourge known as The Milk Machine, the return of Jim Alexander (2000ad, Metal Hurlant) and Jon Haward's (Judge Dredd Megazine, Tales Of The Buddha) popular detective series 'Sideburns', and Travis Wilson crosses the hazardous mutant filled London wastelands in the fourth instalment of John Freeman (Crucible, Judge Dredd Megazine) and Brett Burbridge's Death Duty series. All this, and more! 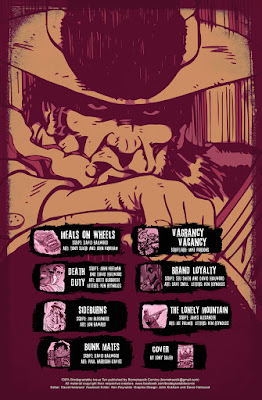 The digital anthology is 30 pages, colour and b/w. 15+ age rating, due to the occasional touch of blood and gore.

"A brilliant mix of dry humour, action, and story driven narrative." - Robert Bagley, A Place To Hang Your Cape

"The kind of smart script and stylish art that would feel right at home in the pages of the galaxys greatest comic!" Alex Thomas, Pipedream Comics

“Featuring a range of styles, themes and ideas, there’s sure to be something of interest for all comic fans.” Ian J. Simpson, Geek Syndicate

And keep your eyes peeled for the first 100% Biodegradable print collection, which contains 30 strips from issues 1-6 of the digital anthology and will be released on Drivethru very soon indeed! 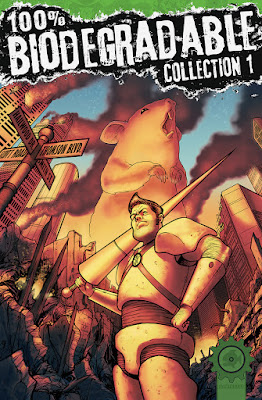