The secret of the soup!

I'm pleased to announce my latest children's book, Grynbad And The Seven Soups, is out now on Amazon! 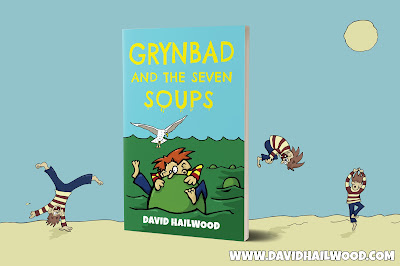 This one has a bit of a story behind it, as I wrote it some years back whilst suffering from writer's block. I say 'writer's block' though it was more like 'writer's repetition'; I was attempting to finish my Navel Navigators novel at the time, and instead found myself writing the same darned chapter over and over again for about a year, never able to get it quite right (I can always tell when the writing's not going so well, as my document naming convention goes out the window; instead of using something along the lines of 'NavelNavigatorsDraft28' I end up going with 'Aaaaaaaaaaaaaarggggghhhh!', 'Whhhhhhhyyyyyyyyy?????' or a terribly rude swear word).

When it comes down to it, the book is all my old line manager Peter Lancaster's fault. I was sat in the staff room, trying to figure out how to get my writing mojo back, when Pete sidled up to me and from out of the blue said: 'Did you know it's actually possible to run across the surface of custard?'

He then showed me a youtube video to prove it (it wasn't this particular video, but it's the best example I could find...).


Now, most people would've edged away at this point whilst attempting to avoid eye contact, but not me (I do like a good custard video). My brain was suddenly whirring away with ideas. Custard...a land of custard...what a great setting for a children's novel! But must it only be custard? Could get a bit samey. What other liquids are there plenty of? Soups! Seven soups...yes, just like Sinbad might have sailed, if he'd gone a bit off course! Hmm, perhaps custard could act as the portal to a whole world of soup related adventures? Now we're cooking!

I rushed down to the local supermarket and did some hefty research in the soup aisle (it's alright, it was Sainsbury's - they're used to nutters in there) trying to imagine what foul creatures might inhabit the various soups.


Once I'd got home from my little expedition and finished shaking my wife vigorously by the shoulders whilst yelling 'The soups, Jenny! The sooooouuuups!!!', I set to work.

The book was finished in less than a month (it's quite a short one, as it's aimed at 7-9 year olds), and I was so pleased with the end result that I sent it straight out to an agent (The Eve White agency, who handle the Mr Gum books). I was quite surprised when they got back to me within the week, asking if they could read the full manuscript exclusively. They said a lot of complimentary things about it; compared my dialogue to the likes of Roald Dahl, said the characters were likeable and that it was very funny. Ultimately they chose not to go with it, but at least they gave me a lot of helpful feedback to work with (and the confidence and gusto to tackle the Navel Navigators novel afresh).

And now, new and improved, and sporting over 20 illustrations drawn by my own fair fingers (with one illustration secretly sketched by the mighty Brett Burbridge. I'll let anyone who reads it try to figure out which one), it is out exclusively on Amazon's Kindle Select. This means that if you have Kindle Unlimited or Amazon Prime you can give the book a read for free. So please, get stuck in. All support is hugely appreciated (even if it's just shares with people you think might enjoy the book, or gold bullion sent to my usual Swiss bank account, every little helps) as I've entered it into Kindle's Storyteller 2018 competition, which is partially judged on the book's popularity.


For the first week that Grynbad's on sale I've reduced the price to just 99p/$0.99 in digital: http://mybook.to/Grynbad

So, there you have it...the secret of the soup, and the answer to how to avoid writers block. Find yourself a bald man armed with a custard video!
Posted by David Hailwood at 10:59