As part of Drivethru Comics' Xmas In July sale, for the next week there's 25% off all but the latest issue of 100% Biodegradable. 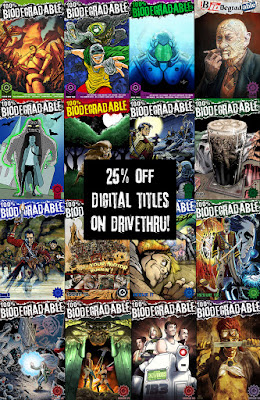 Grab the comics here whilst they're cheaper than a Mars bar, and twice as tasty! (disclaimer: the comics are digital - please don't actually eat them)

And if ridiculously cheap comics are still too pricey for you, the latest issue of Ken Reynolds' experimental comic anthology Sliced Quarterly is out now (with a brilliantly designed cover by Lukasz Kowalczuk). You can download it for free here. 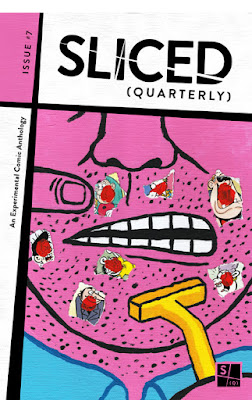 Posted by David Hailwood at 08:44 No comments:

With issue 17 of 100% Biodegradable preparing to slither out of the cracks between worlds and emerge into the light, here's a quick peek at the lovely wrap around 'Rourke Of The Radlands' cover by Bill Storie and Brett Burbridge. 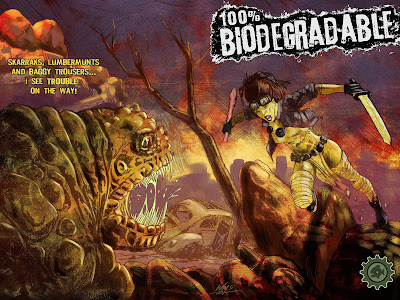 Originally created by John Freeman (Judge Dredd Megazine, Crucible) and Liam Sharp (Batman, Wonder Woman) for Marvel UK's 'Strip' comic in the 90's, Rourke proved so popular that there was even talk of doing a mini-series featuring popular characters from the Marvel universe.

Sadly Marvel UK ceased to be before that could happen, though the original Rourke strip was reprinted in Issue 16 of 100% Biodegradable, after a brand new lick of paint from Brett Burbridge.

You can read more about the history of Rourke and Marvel UK on John Freeman's Down The Tubes. 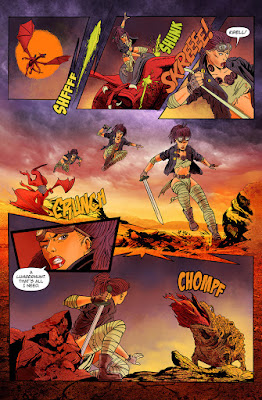 The new issue will be available later today, so keep your eyes peeled!
Posted by David Hailwood at 05:02 No comments:

With Issue 17 of 100% Biodegradable nearing completion, here's a preview of some of the strips appearing inside.
In Capsule by Brian Pearlman and Armin Ozdic (with colours by Liam O'Connor and letters by Ken Reynolds) a musician seeks shelter from the rain in a hotel from hell. 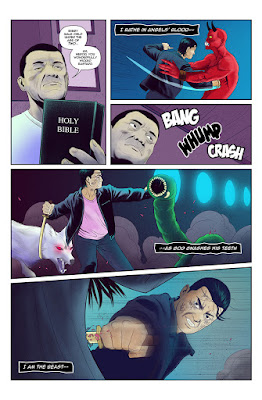 In Waste Of Time by Tony Suleri and David Hailwood, a scientist solves mankind's waste crisis by using the past as a dumping ground...with dire consequences! 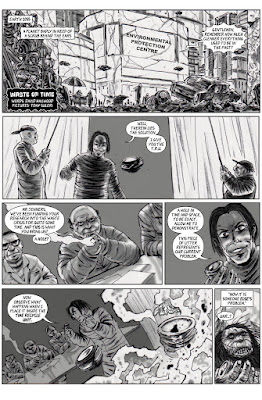 In the third part of Skowdogs (written by John Freeman and David Hailwood, and illustrated by Dave Thomson), the crew of the Skow face off against an ancient alien race, deadly mercenaries, and technology gone haywire. 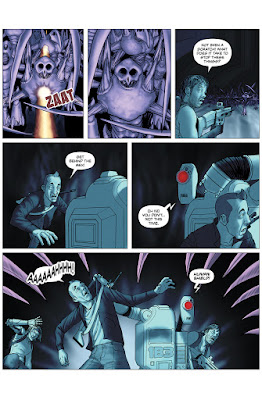 And in the concluding part of Alan Burrows and Paul H Birch's Switchblade, the titular character finds himself up to his neck in giant psychotic dentistry obsessed mutant germs! 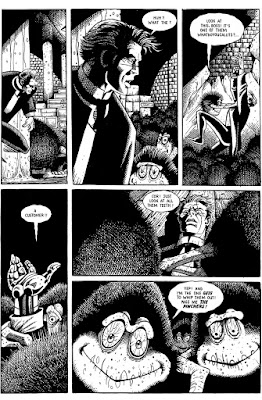 Previous issues of the digital sci-fi anthology are available to buy for just 69p/$0.99 at the following places:
http://www.drivethrucomics.com/browse/pub/6130/Biomekazoik
https://www.comixology.co.uk/100-Biodeg…/comics-series/17594
http://www.comicsy.co.uk/biomekazoik/
Posted by David Hailwood at 00:52 No comments: