My latest comic release, Eat Me and Friends, is out now on Amazon, and collects almost a hundred darkly humorous comic strips from four distinctive series (two of which were finalists in the ROK Comics Humour competition, as judged by the editor of the Beano). 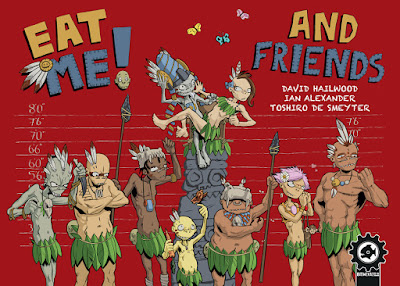 In Eat Me by myself and Ian Alexander, a vegetarian cannibal attempts to find his place in a man eat man world.

In Drink Like A Fish by myself and Toshiro De Smeyter, a hard drinking goldfish demonstrates why it's a bad idea to get between an alcoholic and his daily fix.

In Ups and Downs, a man on a ledge spars with God, Death and a priest in a monkey suit.

And finally, in Wormfood, two dead bodies lying in a ditch in Bognor Regis bide their time whilst awaiting the inevitable zombie uprising.

The collection is available both in colour and black and white, in print and on Kindle, and is perfect for fans of Cyanide and Happiness, or The Oatmeal (or anyone looking for a Secret Santa gift that isn't just a reindeer that poops raisins). Here's the links.

Buy it for yourself, a friend, or someone you hate!

Soon I will have news about a brand new children's comic anthology that I will be launching before Xmas, as well as artwork previews for the next Grynbad book (Grynbad and The Eye Of Griselda).

In the meantime, feel free to get stuck into some 100% Biodegradable Comic Collections, which are once again on sale on Amazon in the UK, US and EU markets at ridiculously cheap prices (but not for long!)

mybook.to/biocol1paperback
Posted by David Hailwood at 12:33 No comments: