Coming to issue 6 of 100% Biodegradable (due out mid-september) - The Visitor by Stu Perrins and Vince Hunt. 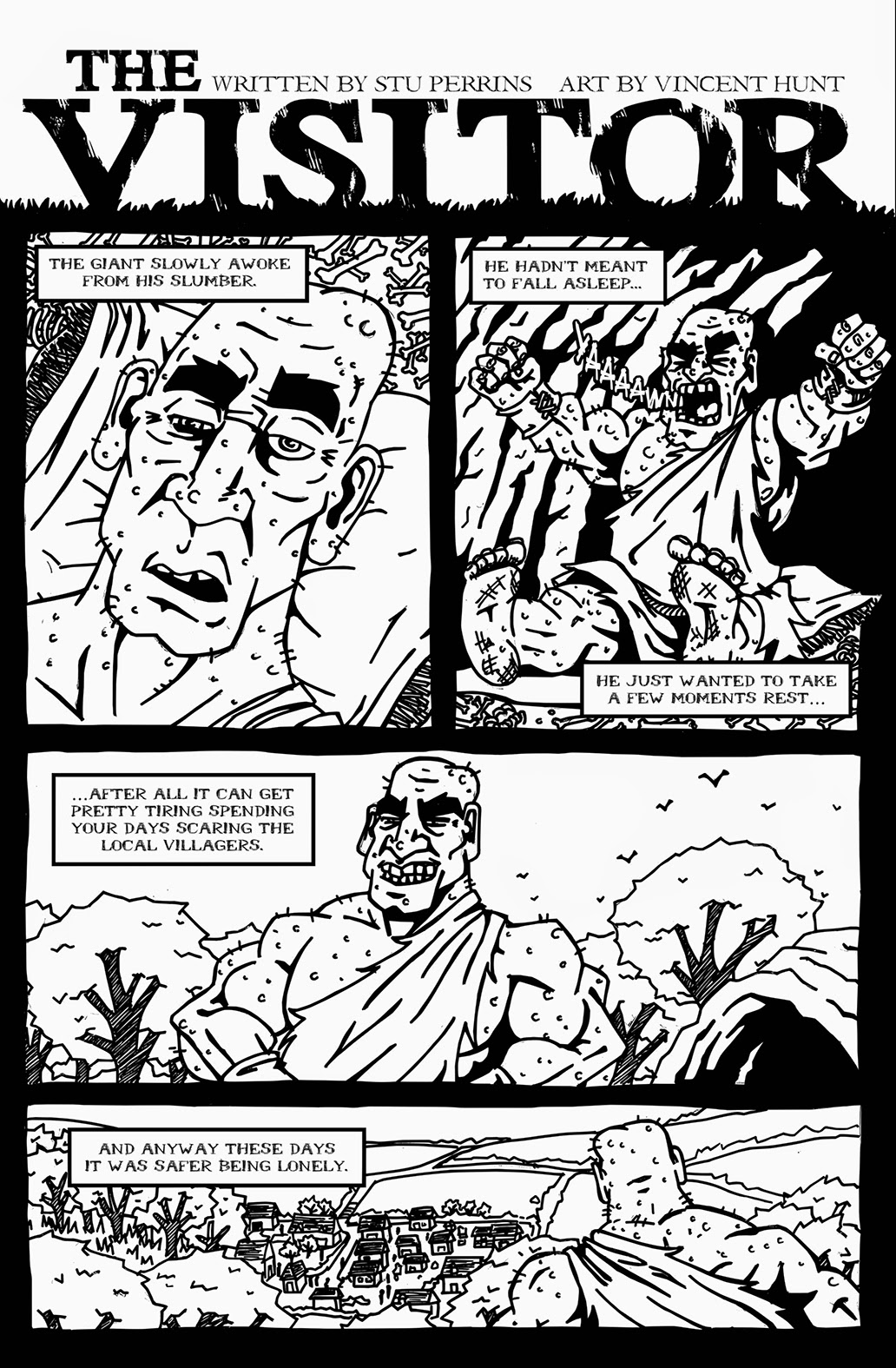 A bit more about the creators:

As well as having strips published in such titles as 'Ashcan Oddities', 'SPOD!' and 'The Psychedelic Journal of Time Travel'  Stu Perrins is the writer and co-creator of 'Prime', 'Harvey Spig' and 'Mercury'.  He also writes 'Imperials' for Red Leaf Comics and acted as editor for charity anthology 'Tales from a Lonely Planet'.

For more info, follow him at www.twitter.com/stuperrins.  You can also download the first issue of 'Prime' here -- http://comics.drivethrustuff.com/product/133163/Prime---Issue-1-the-future-is-bulletproof

Vincent Hunt is a designer and creator of The Red Mask From Mars. When not hunched over a drawing board making comics he can be found tweeting his face off at @jesterdiablo or sharing more of his work at http://jesterdiablo.blogspot.co.uk
Posted by David Hailwood at 00:12 No comments:

Coming to Issue 6 of 100% Biodegradable (out mid september) - Dead Beats by David Hailwood and Neil Alexander (creator of Good Guys, and quaffer of other people's pints).

For all your chainsaw wielding, zombie dismembering needs! 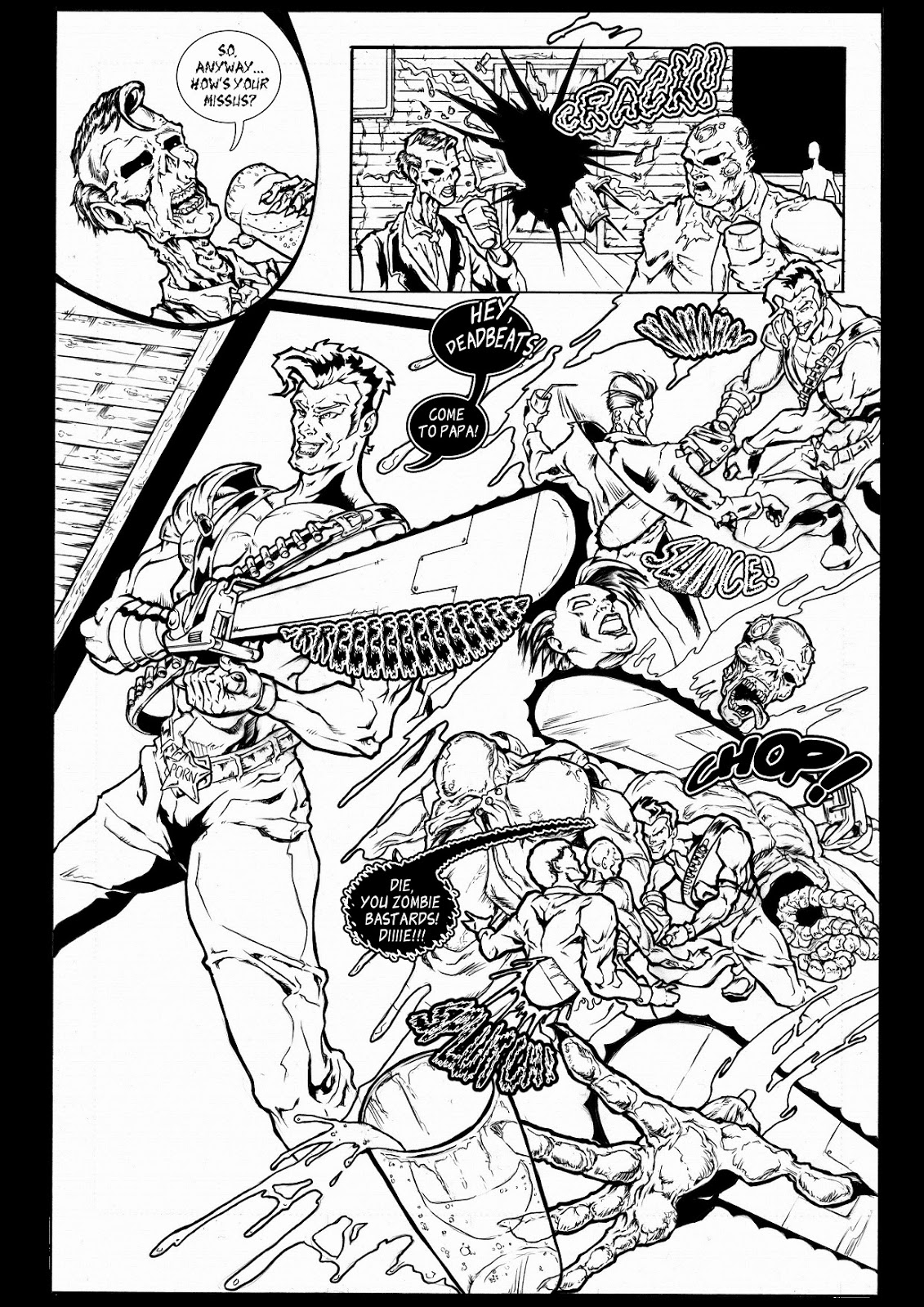 Posted by David Hailwood at 03:42 No comments:

Posted by David Hailwood at 03:33 No comments: 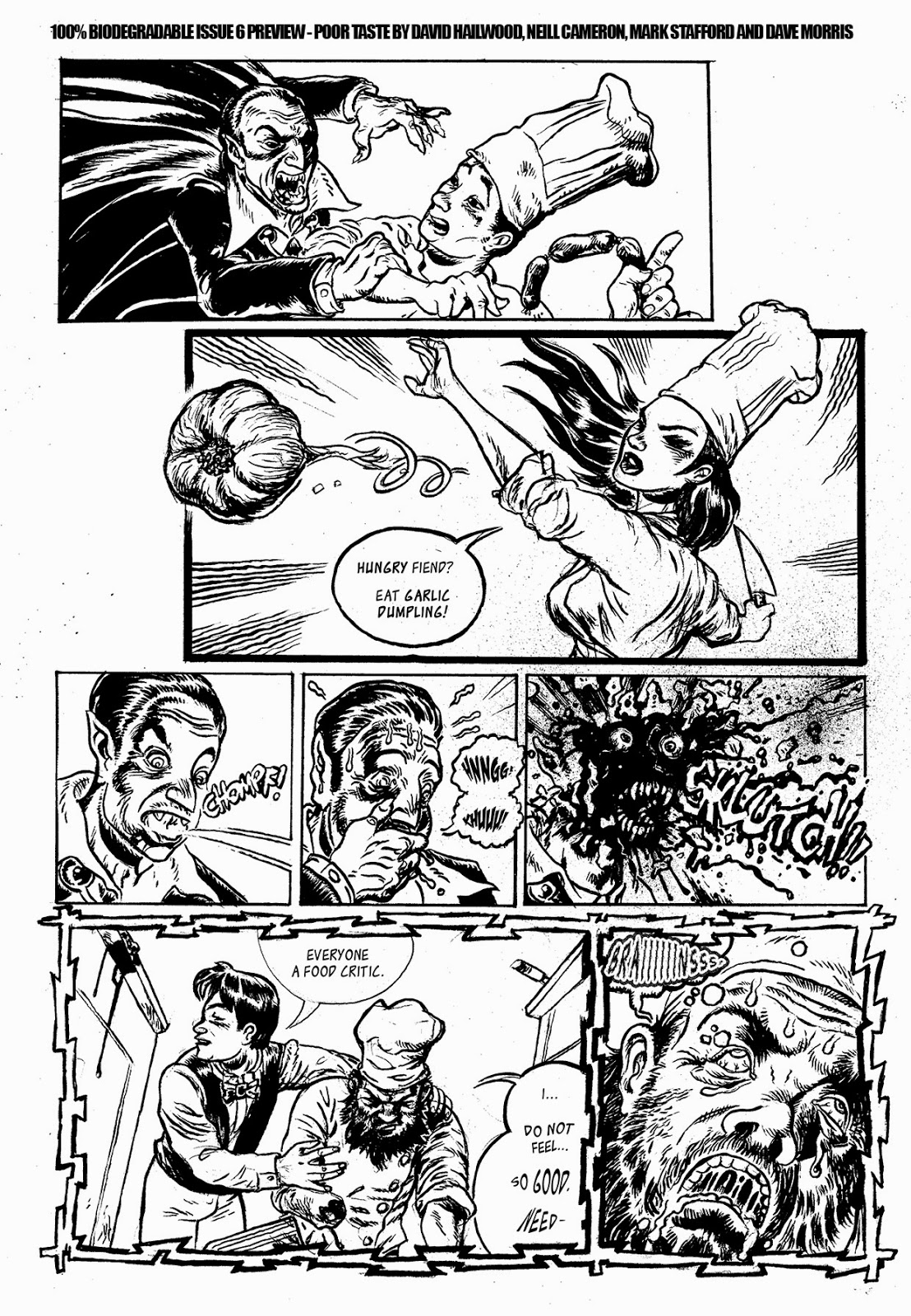 This classic strip was originally published in 'Meanwhile...' A comic anthology from the late 90's, published by Soaring Penguin, which is currently on the verge of making a come back (watch out for it!  There's some amazing artists involved).

The artist, Neill Cameron has of course been highly active since, working on many a strip for The Phoenix (such as Mo-Bots and Pirates Of Pangaea).  You can catch more of his work here: http://www.neillcameron.com

Mark Stafford (http://www.hocus-baloney.com) provided the inking, and is also a highly accomplished cartoonist.

Another cartoonist, Dave Morris (who self published the rather marvellous 'Burp!' comic back in the 90's), came up with the idea of a 'vampire outbreak at a Chinese restaurant' as a throwaway comment, which myself and Neill thought was far too much fun to pass up!

Issue 6 will be out mid September.  In the meantime, you can pick up previous issues at Comicsy, Drivethru or Comixology at the following links:

https://www.comixology.co.uk/100-Biodegradable/comics-series/17594
Posted by David Hailwood at 08:49 No comments: