Late last year I was invited by the author Linda Jones to illustrate her upcoming children's novel 'Deadwood Hall', which launched just before Christmas. 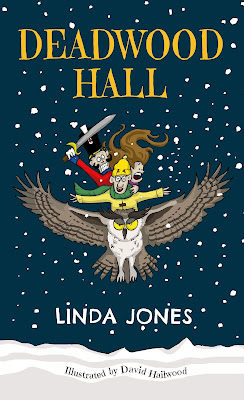 It's a book about secrets, friendship and magic. Though what drew me to the project was the fact that I'd get to draw giant rampaging insects and slimy lizard creatures (and to think that my school teachers only ever wanted me to draw wicker baskets and bowls of fruit! They missed a trick there, I reckon).

Since I'm just about to get started on illustrating the sequel, I figured this might be a good time to actually mention that the first book is out.

It's available in paperback and ebook on Amazon, at the following link:

It's already managed to hit the top 100 bestseller charts in the 'Fantasy and Magic' category (at number 57), and seems to be going down well. So if you happen to have one of them 'small human' types, perhaps consider giving it a look.

In other news, I'm also hard at work writing and illustrating the Grynbad sequel, 'Grynbad And The Eye Of Griselda', which sees Timmy Grynbad and his mischievous grandpa take to their skies on the most miserable magic carpet in the world, as they go in search of an old ladies eyeball. Featuring more pirates, harpies and dragons than you can shake a peg leg or hook hand at!

The first Grynbad is still doing really well on Amazon, who keep giving it a rather fetching orange sticker.

I'm also in the process of trying to get the first 100% Biodegradable Comic Collection accepted by Amazon. The Kindle version went through without a hitch, but the print version keeps getting rejected due to 'lack of bleed' (even though the bleed is spot on). I've heard this is a problem that's scuppered many a comic creator before, so here's hoping I manage to get through the process with at least a tiny bit of my sanity intact. 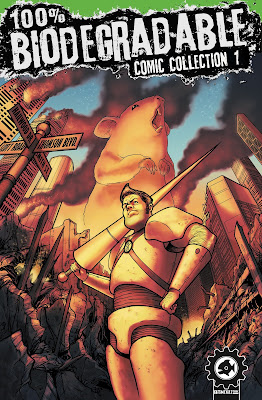 More updates will follow soon...unless I get distracted, or, y'know, forget...