My new free to read short story and narrative poetry collection 'Dead Short' has just launched on Wattpad, kicking off with the zombie comedy 'Death After Life'. 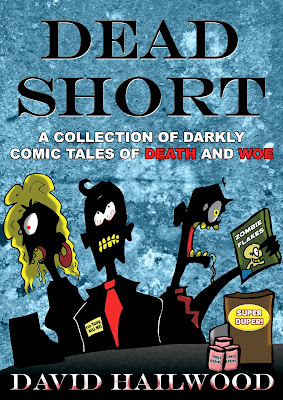 If you think you're having a bad day, spare a thought for poor Tony the supermarket shelf stacker, who chokes to death on a peanut during a zombie virus outbreak and is disappointed to learn he still has to go in to work the next day.

A new story or narrative poem will be published every Monday, until the collection is full enough for me to wrangle a Createspace print collection together (which may also contain some of my three panel Wormfood cartoons).

Here's an outline for a few of the stories and poems you can look forward to reading over the coming months, most of which were written whilst I was on the University of Chichester Creative Writing BA and MA.

In the deeply romantic love ballad 'Butt Ugly' a man attempts to come to terms with the fact that his girlfriend's not quite the looker she used to be, since she lost her face in an office shredder.

In 'The Devil In The Dole Queue', Satan realises that mankind’s far superior at creating death, misery and destruction, and decides to call it a day and join the unemployment line (I've been reliably informed that this particular poem used to adorn the walls of the back office in Hastings DWP).

So, if you get a free moment please head along to the following link and give the first story in the collection a read/vote/comment. I'm hoping to enter into into the Wattys 2018 Competition in June, so all support is greatly appreciated.