Quite A Lot Of People Know That

Whilst I'm scrabbling around for reviews for my recently released 'Navel Navigators' novel, I thought it might be handy to come armed with some sales figures for my previous book 'Not A Lot Of People Know That' (written by myself and Frank Burton/F.J. Riley).

Up until this week, I hadn't a clue how many copies of the free humorous 'facts' book had been downloaded, and I don't think Frank had really looked into it either.  So it came as something of a surprise to discover that, to this date, we've had over a quarter of a million downloads.  That's, uh, rather a lot isn't it?  Especially since we did very little to promote it (my main attempt at promotion involved hollering 'Squirrels don't have knees!!!' out of a bus window at passers by).  Most of the downloads occurred in 2011/2012, which we like to call our 'viral' period, when we were getting around 100,000 downloads a year.  It's now slowed to a thin trickle, but the book still remains in the top ten 'free humour' books chart on iBooks.

Much as I'd love to share our recipe for success, I think a lot of it comes down to luck.  When Frank (who was the driving force behind the book, even though my name comes first) came up with the idea of writing a made up fact book, he wanted the majority of the facts to be almost believable (eg: 'The Amazon contains at least five lost tribes of television documentary crews, three of which were originally sent in to document the lives of the other two').  This created a very polarised audience for the book (as anyone who's read the praise/death threats on iBooks and B&N will be aware) and resulted in hundreds of reviews from people who were keen to either vent their frustration at the facts not actually being true, or praise the book for making them laugh.  NLPKT (as I shall abbreviate the title from now on) has received over 80 five star reviews, and just as many one star reviews; the front page for NLPKT on iBooks at this moment begins with a 5 star review that states 'The funniest book I have ever read', immediately followed by a 1 star review that states 'Worth reading - if you are five, or an idiot'.  There were people who stated they felt 'a little bit more knowledgable' after reading the book, and others who mentioned it was being used by teachers in certain US schools (huge apologies if we're in any way responsible for the rise of Donald Trump!). 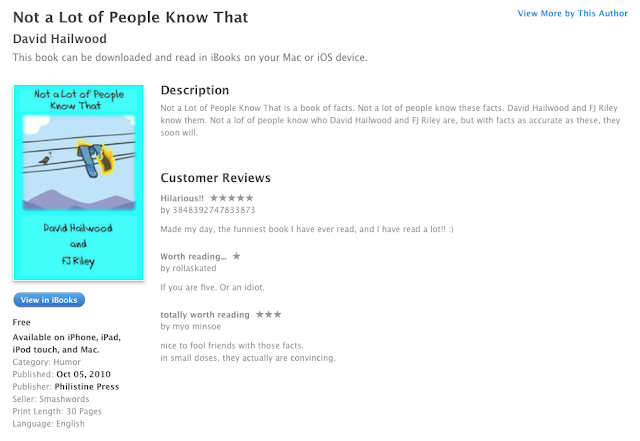 We tried to leave many clues that the facts inside the book were blatant falsehoods; categorising it as 'fiction' and 'humour' was certainly a rather large hint (though I've noticed it's been accidentally categorised as 'factual' in some digital stores, which may have helped fan the flames of reader discontent).  The front cover has a picture of some 'pants' on fire, and many of the facts were just too damned ridiculous to be true (seriously, if you have a headache, please do not try and coax a monkey to urinate directly into your mouth.  This will NOT cure it).  Then again, life does have a habit of imitating art, and some of the more outlandish facts in the book - such as the one about the surgeon who keeps leaving rude messages on patients internal organs - have actually come true.

I'm curious as to whether NLPKT would have been such a success if we'd gone with the books original title of 'Made Up Facts' (which we sadly had to change, once we realised the abbreviation was 'MUF').  I mean, you can't really give the readers a bigger hint than that, can you?

Anyway, given the success of NLPKT, I've suggested to Frank that we perhaps get working on a special Amazon collected version which would combine the best 'facts' from books 1 and 2, and add a lot of new material (possibly illustrations, if I can find an artist who's up for the challenge).  I doubt the print version will be quite as successful as the free digital book, but it'll be nice to see how far we can push it.  With any luck we'll manage to get the collected works out before all the facts inside come true!

In the meantime, Frank has a 'Ragbag' comedy podcast that he's currently producing, which has a similar flavour to NLPKT (he's already successfully managed to enrage Bono fans, so he must be doing something right).  You can check it out here: https://soundcloud.com/frank-burton-912417543